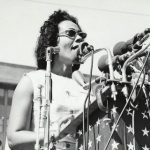 John F. Kennedy became president in 1960. His administration dealt with school integration, the Cuban Missile Crisis and the space program.

The culture of the 1960s included the introduction of the birth control pill and the founding of the National Organization for Women (NOW) on June 30, 1966, with the stated purpose of “bringing women into full participation in the mainstream of American society.” In 1963, Betty Friedan published “The Feminine Mystique.”

In California, Ronald Reagan was elected governor in1967. He signed the Therapeutic Abortion Act in an effort to reduce “back door abortions.”

Sacramento’s population grew 34 percent during the 1960s, and AAUW’s Sacramento Branch membership grew as well. The branch began the decade with 952 members and ended with 1,134. Neighborhood coffees were held to welcome new members.

The Sacramento Branch’s executive board consisted of elected and appointed officers and three members-at-large. There was one paid executive secretary.

Community involvement during the decade included staffing phones for the annual KVIE auction, interacting with business and nonprofit entities to provide refreshments, and endorsing candidates for City Council and school boards.

Branch members participated in the annual Breuner’s table settings contest, winning a $75 prize, and served as volunteers at the KCRA Public Affairs program-sponsored measles clinic. In 1968-69, Channel 10 honored AAUW as an Organization of the Month.

In 1964, Anita Miller represented AAUW on the governor’s Status of Women Commission. In 1968, AAUW was one of 25 organizations that launched the Community Commission for Women.

In the mid-1960s, the Association did some reorganizing and started the following Program Areas: cultural, community problems, education, and world problems. Study Topics for the program areas were two years in duration: