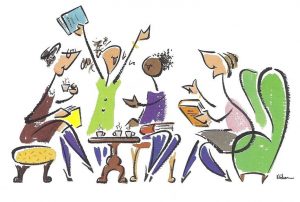 For as long as the AAUW Sacramento Branch has been in existence, reading and discussing books together has been an important building block for developing friendships and lifelong learning among our members. When our branch was the largest in the United States, the number of book groups numbered into the 30s. Currently, we have nine different groups in various areas of town. Each has its own way of doing things.

The Cultural History group chooses a nonfiction book to be read over a period of 3-4 months, breaking the reading into sections. They then decide what to read next. Over time, they have read books on a wide array of topics from history to clothing to women’s rights.

The long-established Midtown/East Sac group holds a snack potluck in October to choose their nine books for the coming year. During meetings, each member states her opinion of the book before the moderator leads a general discussion.

Our oldest continuing group, number 2, began in 1959-60, and took over that number at the request of Catherine Patterson, a retired Sacramento City College professor who was a member of the original group 2. She wanted their group’s number to be carried on. Corinne Geeting and Anita Miller were among the very well-known Sacramento women active in group 2 at one time.

Book group 6 is geared to the lives of working women. The group begins each meeting with food and wine, which are enjoyed as books are discussed. Except for July, the group meets year-round and alternates monthly between fiction and nonfiction. Books are chosen in January

Formed in 1993, group 8 decided to read only women authors, picking 5 fiction and 5 nonfiction books each year alternating between them monthly. To finalize the decision of whether to meet at 7:00 or 7:30, they compromised by setting the time at 7:14 pm. Ruth Burgess was a member, and they are supporting a scholarship in her honor.

The second oldest group, 10, holds social gatherings twice a year at which husbands and significant others are included. During the year they keep a running list of possible book choices, which are then voted on at the May meeting. They choose a mix of fiction and non-fiction and try to include a “classic” every couple of years. Long-time members have many special memories of progressive dinners, the infamous punch, and the baby shower when nobody thought to check whether or not the expectant mother was coming. They did manage to have a successful event the next month.

Group 33 has no idea why they have that number, but they’ve been going strong for more than 10 years. They choose one biography, one “old-timer” and a mix of fiction and nonfiction to read. They thoroughly enjoy each other’s company and have developed close friendships.

Membership in group 4 has been centered in the Land Park area, and the group is going strong even though Pat Morehead and Nancy Lawrence are the only ones preventing a complete member turnover during their 25-year tenure. Like others, they suggest books a few months before selecting them and are one of the year-round groups.

Some groups meet during the day and others in the evening. All groups choose books that everyone reads and set up rotating schedules for hostess and moderator duties. They all enjoy the comradery of good friendships and shared intellectual discussions.